When I was about 9 years old, I asked Jesus into my heart at an evangelistic meeting at our youth camp at Hume Lake. I confessed that I was a sinner, thanked Jesus for dying on the cross for my sins, and told Him that I wanted to live for him.

Did I understand all that that meant at age nine? No. Was I sincere? Yes. Did I believe I was saved? Yes. WAS I saved? Later, I questioned that very thing.

Already plugged into an evangelical, Bible-teaching, missionary-minded church, I went to Sunday School, morning and evening services, and Wednesday Night prayer meeting with my mom. I prayed to God during those young years – simple, childish requests – and believed that He would answer them. And He did.

I was a part of the monthly missions emphasis in the elementary grades, junior high, and on into the Women’s Missionary Assoc. I learned about our mission fields and missionaries, supported, and later hosted them in my home. At the beginning it was mainly Sierra Leone, West Africa, but later we had missionaries in Hong Kong, Macau, Honduras, Nicaragua, Jamaica, and eventually India.

I never dreamed then that I would ever get to see any of those places, but God has been so gracious to allow me to go to Africa twice since we moved down to OC and came to FBC. How good he is!!

(The old timers that I grew up with in missions at that church are the ones who faithfully supported me through prayer and giving when I went to Malawi.)

I met my husband at church when he moved here from Oregon and was living with his aunt and uncle, who attended. After we were married, we got involved in different ministries in that church, including leading the older youth group for a while, some Sunday School teaching, and the building program.

Sadly in the several years that followed, I strayed from my love and commitment to the Lord. Family trials after we adopted a son (and the bitterness that sprung from them), outside interests (including immersion in Musical Theatre that helped me escape from the anxieties at home – after all, they had romance, carefree songs, and happy endings!), resentments and bitterness (from things not turning out as I’d hoped), rebellion, and unconfessed sin left me feeling distant from God. I continued in superficial service, but my heart was far from Him. 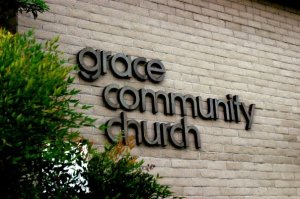 Meanwhile, our little congregation disbanded and sold the church building to a growing Hispanic congregation, and we started going to Grace Community Church. I was faithful in attendance, but only to Sunday School. (The worship services with the huge, multi-voice choir and full orchestra reminded me too much of Theatre, and I’d finally gotten out of that deceptive “world.”) My heart remained cold and withdrawn. I knew I needed to “get right” with God, but I stupidly resisted.

As I listened to the messages each Sunday, I realized that our former church’s doctrine about how a person gets saved was different from Grace.   (Arminism & Calvanism)

I had grown up believing that you heard the Gospel and through the Spirit’s “wooing,” you made a decision for Christ. But under the teaching of John MacArthur and Don Green, I began hearing that Jesus’ atonement was not for the whole world as I’d learned in John 3:16, but that God foreknew and chose and called “some” (His elect) for salvation before the world even began.

Suddenly I began to doubt my salvation. What if I wasn’t one of His elect? How would I know? I hadn’t had a huge night-day conversion like some had. I’d simply asked Jesus into my heart and believed that I was saved.  It was true that I had grown in the knowledge of God and love for Him over the years, but what if I was just deceiving myself?  What if I hadn’t been “chosen” by God to be saved?

The current rebellion and coldness of my heart made me fear even more.

I went up and down with this issue as FIRST I heard the teaching about God’s sovereignty, and THEN reviewed the details of my life over the past decades.  That feeling of distance from God at the time didn’t help. Was I saved or not? I asked Pastor Green how you could KNOW if you were God’s elect. He referred me to passages in I John, which we were studying.

By this we know we have eternal life….

I tortured myself asking how I measured up to all those “by this we know” verses.

I was still anxious and confused inside (okay, I was DOUBTING) when we moved to south Orange County and began attending Faith Bible Church. One of the first sermons I heard was Pastor Koh quoting John Piper asking if we would be satisfied in heaven if Jesus was not there. My heart answer scared me. Did I truly love Jesus supremely? If not, was I truly saved? Sometimes I just wished I’d led a horrible life of debauchery before, so I could see a huge difference at my conversion.

Sunday sermons kept hammering on the question of true salvation, urging us to examine our hearts to make sure we weren’t just living a “good Christian life” without truly knowing the Savior.

Gradually, during my quiet times (Yes, I had begun them again) I began to see the resentment, rebellion, and sin in my heart that I needed to deal with. I confessed those sins and more as God brought them to my mind, pleading his mercy, and receiving His forgiveness. Like the prodigal son I was coming home, but that big “election” issue still remained unsettled.

I knew Jesus had “died for my sins,” but I hadn’t then grasped the awesome truth of what that meant.

I prayed that God would just settle this question for me. To somehow SHOW me I was a Christian. Couldn’t I just see His “stamp of approval” on me – you know, instead of the Antichrist’s “666” on my hand or forehead, a “777” just so I could be SURE!

Then one morning when I was praying, begging, for some sign, I suddenly realized what a great sin I was committing. I was asking God Almighty, Creator of the universe, to single me out and show me special treatment just so I could believe, that I was one of his chosen.

I was like the Pharisees – having Jesus in their very presence, preaching and doing miracles, they had the gall to ask Him for some “sign” to prove to them who he was, before they would believe.

I was asking God to prove something to me too instead of just believing His Word!!

When God showed me my heart – revealed this great sin of unbelief – I was horrified and I crumpled before Him. Such audacity! Such great pride! I couldn’t get low enough before Him even if I fell through the floor and kept going.

Oh, my God! I cried. I’m so sorry! How could I not just believe what You’ve said your Word instead of putting You to the test? Oh, what sin!  What a sinner I am!  Oh, God, please forgive me!

And with His great love and grace, He showed me the complete forgiveness of my sins. All had been paid for on the cross. He’d said it in His Word, but my sin, and doubt had blinded me.

What a glorious moment of assurance. Despite being a prideful, arrogant sinner, one who had strayed disgracefully away from Him, I was His child. He knew me, loved me, chose me, and sent his Son to save me.

All God’s righteous wrath was poured out on His innocent Son because of my sin. Jesus stood in for me and took the punishment I deserved. Then God raised Him up to prove that He was sinless in Himself.

God sees me through the blood of His Son – which blots out all my sin – and sees only righteousness. I don’t know how that can be, but God said it, and I now totally believe it.

I still need to read the gospel verses over and over to remind me of my position in Him, especially when I’ve allowed sin and distractions to take my eyes off Him. And I still struggle with pride, self-righteousness, conceit, love of glory, disobedience, and stubbornness.

Recently I’ve been asking God to show me how to kill these sins in life, and He reminded me that the Holy Spirit uses His Word (the “sword” of the Spirit, Ephesians 6:17) to do that, so I’ve been reading the Bible more, with more thought. I’ve also asked Him to teach me to obey quickly, to submit to Him and to other authority, and to humble myself before Him.

It’s a tough learning process, and I’ve only begun. And sometimes He’s had to take me through some dark places. But it is WORTH IT.

“Therefore be imitators of God, as beloved children. And walk in love, as Christ loved us and gave himself up for us, a fragrant offering and sacrifice to God.” Ephesians 5:1-2