My favorite Christmas carol has always been We Three Kings, written by John H. Hopkins, but I know it’s not one of the most popular Christmas songs. I think everyone gets hung up on the “O-o-o, star of wonder” part, or maybe even the minor key in which it’s been written.

But the words! It’s the words that sell it for me.

The Bible does not say how many “kings” or “wise men”  or “Magi” came to worship Jesus. It only mentions the three gifts they brought; valuable tokens of their esteem, and very useful “cash” for Joseph & Mary to use as they fled with Jesus to Egypt to escape Herod’s murderous madness.

Herod, as you recall, was very jealous to hear that a new King had been born, and so inquired of the visitors when they first saw the star. Using that time frame he ordered all boys – age two and under – to be killed. Killed! Innocent babies, precious sons, destroyed!

But by this decree we can be pretty sure the visitors from the East did not make an appearance at the stable, but came to a house in Bethlehem, “where the Christ child lay.”  That’s where they presented the gifts, on bent knees. Gold. Frankincense. Myrrh.

And this is where THE WORDS to the carol, We Three Kings come in.  They explain what these 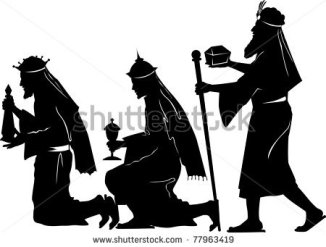 gifts represented; what they told of the life of Jesus, the Messiah.

Okay, now let’s look at the GIFTS presented to the Christ child:

GOLD to represent Jesus as King, the promised descendant of King David, one day to be hailed as King of Kings and Lord of Lords.

FRANKINCENSE was used in the worship of Almighty God, the Holy One of Israel. Not only is Jesus KING, He is also GOD

MYRRH was a very costly ointment used to mask the odor of a body when it is buried. When Mary Magdalene broke an alabaster jar of it and poured it over Jesus as an act of extreme love and devotion, Jesus said she had “anointed Him for burial.” Now look again at where verse four leaves Jesus: crucified and buried in a “stone-cold tomb.”

But hallelujah! Praise God!  See how verse five brings us to His resurrection!

We Three Kings is a carol of worship and praise. It’s why I love it. Jesus, my King, my God, my living Sacrifice for sin. The visitors traveled half way around the world to worship Jesus. Let US open our hearts and let our praises rise to the skies!

Oh, and don’t get hung up on the Star of Wonder – wondering perhaps (sorry for the pun) if it actually moved before the travelers, or if it was a juxtaposition of several stars that alerted them to the birth, or if it was maybe a comet, or a “shooting star.”

This site uses Akismet to reduce spam. Learn how your comment data is processed.